Raatea maintained the fine form of our team with a fluent success in a maiden race over a mile at Kempton on Friday.

An attractive son of Invincible Spirit he was gelded over the winter after showing plenty of promise in three runs last season in the colours of Sheikh Hamdan which earned him an opening handicap mark of 84.

He certainly looked a smart prospect on Friday as he displayed a nice turn of speed two furlongs out on his way to a decisive triumph by two and a half lengths from the favourite Semser.

Winning jockey Dane O’Neill was clearly taken by the manner of Raatea’s victory.

“He settled well off a steady pace, travelled strongly, and experience counted as he quickened up impressively. I’d like to think there is improvement to come”, he suggested.

O’Neill is looking forward to wearing the silks of Sheikh Hamdan on Marcus Tregoning’s stable star Mohaather in the Queen Anne Stakes at Royal Ascot on Tuesday with the owner’s retained jockey Jim Crowley opting to ride Mustashry. 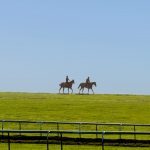