The easy success of Modmin In a novice stakes over a mile at Goodwood on Sunday on his third start offered plenty of promise for the future.
All the focus afterwards was deservedly on his jockey Jim Crowley for reaching the notable milestone of 2,000 winners.

Jim has enjoyed great success at the highest level since being retained Sheikh Hamdan and it was entirely fitting that he achieved his landmark victory in the Sheikh’s colours.

Jim rides out regularly at Whitsbury, is a pleasure to deal with and a great asset to the team.

He kept things simple on Modmin who made all the running and readily pulled clear In the closing stages to beat Rome Imperial by eight lengths.
The progressive winner could be an interesting contender in handicaps. He was given an official mark of 80 after finishing a close second to a useful type at Chepstow on August 15 and given the modest nature of the opposition on Sunday Marcus will he hoping that the handicapper does not mark up too much. 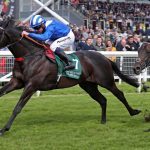 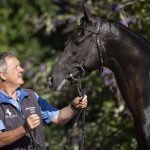