Al Azhar gained his first success for his trio of owners at Goodwood on Saturday in a Class 5 handicap over ten furlongs.

He had shown promise when finishing second off a mark of 64 on his handicap debut on final start as a two year old at Kempton in December over a mile.

Raised 2 lbs by the handicapper Al Azhar was gelded over the winter and looked sure to appreciate the step up in trip at Goodwood. Despite showing signs of inexperience he kept on stoutly to catch the long time leader Swilcan Bridge close home.

Given that his dam Arabian Comet was rated over 100 at one stage, stayed very well and was only narrowly beaten in the Group 3 Lillie Langtry Stakes at Goodwood, there should surely be more to come from Al Azhar as the season progresses.

He was originally owned by Shadwell Estates but now runs in the colours of John Wallis, Stephen Wallis and Nona Baker. 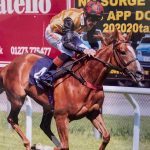