HAIZOOM OFF THE MARK WITH SANDOWN WIN

Haizoom extended the fine run of the yard with a determined victory over a mile and three quarters at Sandown on Friday.

The third success for the Tregoning team this week was delivered by a promising stayer who was homebred by The Shadwell Estate Company.

Haizoom had finished out of the money on her previous three outings but she was always going to be suited by a step up in trip on her handicap debut and showed a commendable attitude to prevail by a neck off a modest mark of 55.

Having led just under two furlongs from home she then faced a stern challenge from Lawmans Blis who edged ahead before Haizoom rallied willingly to gain the day in a tight finish for this Grassroots Flat Stayers Series Qualifier.

Normal progress for this lightly raced filly should see Haizoom remaining competitive once the handicapper has had his say. 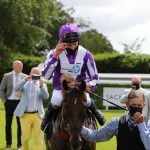