Perotto continued the excellent form of the yard with a convincing success under top weight in the nursery at Sandown on Friday in the colours of Halcyon Thoroughbreds.

A model of consistency in three starts at six furlongs he has plenty of pace and could be named the winner some way from home on his first attempt at five furlongs.

Martin Dwyer was content to wait on the two trailblazers before easing his mount to the front a furlong from home.

Perotto then quickened up smartly and was firmly on top at the line where he was fully a length and three quarters ahead of Onaraggatip with the favourite Holwah half a length away third.

A progressive colt with a pleasing attitude the winner should continue to shine while conditions are in his favour. 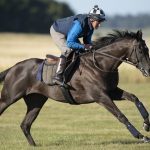